For the 22nd time the city of Jelgava welcomes to the most remarkable winter event in the Baltic States - the International Ice Sculpture Festival under a theme of Ancient Deities - on February 3rd to 5th. The festival celebration will take place in three locations: Pasta Island (Pasta sala), Jāņa Čakstes boulevard and open-air concert hall "Mītava". The festival offers concerts from popular musicians, show on ice, creative workshops, a market and much more.

Taking into consideration the high intensity of traffic organizers kindly ask all the traffic participants to be careful. Arriving at the festival location by car it is suggested not to cross the bridge over river Lielupe in order to avoid a traffic jam. There will be provided parking lots on both of the river sides. Use the app Waze for more convenience as well as following the traffic updates, nearest parking etc. 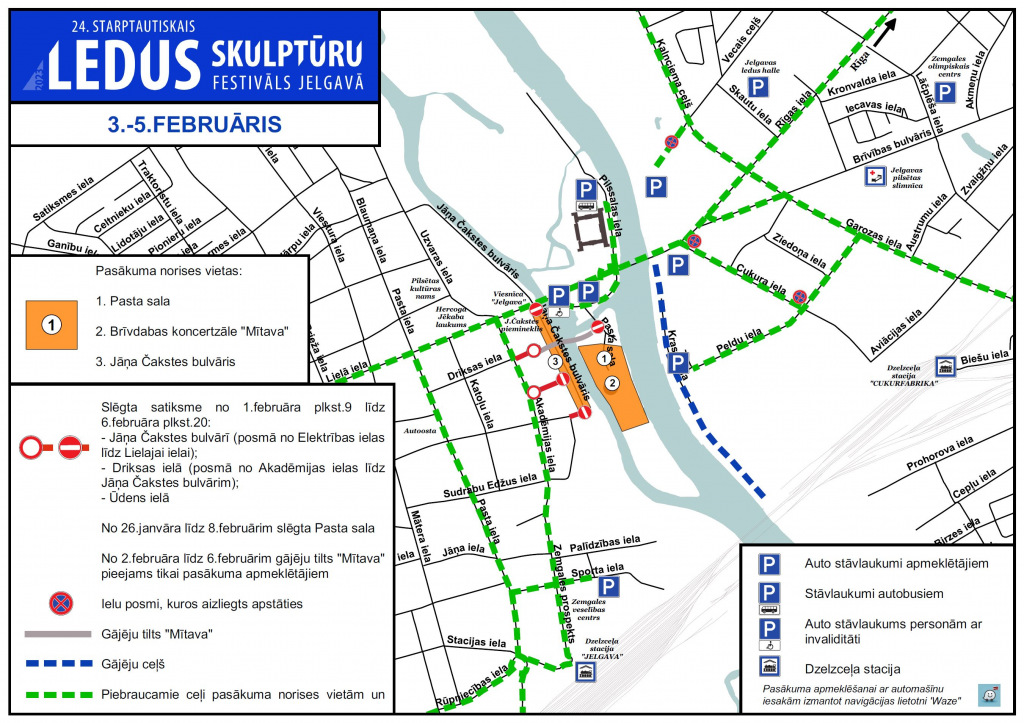 The main stage of the festival will be in the open-air concert hall "Mītava", but sculptors will start work on the creation of sculptures on the Post Island from January 30th.

In order to access the housing, residents of Raina Street are kindly invited to use Elektrības street, while residents of other buildings will have easier access to their housing. February 2nd to 6th, the pedestrian bridge "Mītava" will be available only to visitors of the event.

In the city of Jelgava, Driksa and Lielupe rivers are crossed by only one bridge, therefore, jams are expected during the festival due to increased traffic intensity. Visitors of the festival are invited to park their cars on the bank of the river from which they plan to enter the city, and not to use the Lielupe bridge, while residents of Jelgava are advised to walk to the event or use the city's public transport. We also invite festival guests who will go to Jelgava from Riga to use the train. For schedule visit: www.pv.lv

When entering the city from the Riga, cars can be parked in the meadow opposite the Jelgava Palace and in the meadow on Cukura street near the Lielupe river's left bank's promenade, Zemgale Olympic Center and Jelgava Ice Hall parking lots. When entering the city from the direction of Dobele or Šiauliai cities, drivers are invited to use the parking lot on Sporta street 2C, where there are spaces for cars and buses, as well as other city parking lots specified in the traffic organization scheme.

Tour operators and travel agencies are invited to park buses in the parking lot behind Jelgava Castle. This parking lot will be for buses only. Pilssalas street, turning from Liela street, is crossed by the Lielupes bridge, so please note that the bus must not be higher than 4 meters. On Pilssalas street, near the "Silva" tea house, a parking lot will be organized for individuals with disabilities, which can be used by presenting a disabled parking permit and placing it in the car's interior near the windshield. People passing through the city in a hurry are invited not to enter the center of Jelgava and to use the following roads: A8 Rīga – Jelgava – Lietuvas reža (Meitene), A9 Rīga – Liepāja.

Municipality in cooperation with GPS navigation software Waze has developed the map of parking lots and restrictions in real time mode, which will help visitors to plan their traffic route.

The festival will be held in three places: on the Pasta Island, Jānis Čakste boulevard and open-air concert hall "Mītava". This year, the festival gathers 32 world-renowned sculptors from 12 countries. 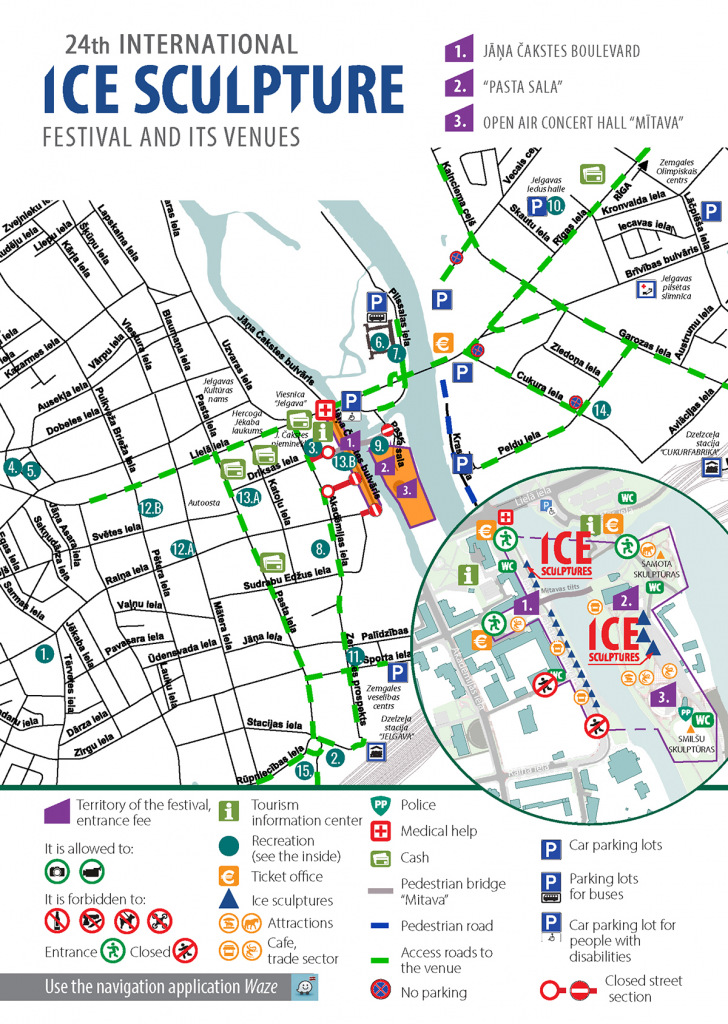 During the festival, the most impressive and largest ice objects - sculptures of 15 teams - will be on display on the Pasta Island. Each team of sculptors uses almost two tons of artificially frozen crystal clear ice to create sculptures. Also, the "Ledus vieni" ice bar, as well as various photo objects and attractions for children, will be located here. Get acquainted with the program HERE.

30 individual ice sculptures made of 1.8x1.1 meters and 50 centimeters thick ice block will be placed along the length of Jānis Čakste boulevard.

Entrance / Exit of the festival territory

To enter the festival territory there are 3 entrances/exits (view the map) as follows:

Festival guests are invited not to leave the purchase of tickets to the last moment, but to buy them cheaper in advance until February 2 at "Biļešu Paradīze" sales points and on the website bilesuparadize.lv. In order to reduce queues at the box office at the festival venue, we invite you to buy tickets online, they can also be presented electronically using a smart device at the entrance.

Visitors to the International Ice Sculpture Festival are asked not to bring pets, dogs will not be allowed in the event area. It is allowed to photograph and film sightseeing objects, but it is forbidden to fly unmanned aircraft/ drones over the territory of the event without coordination with the municipality.